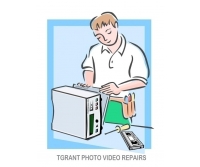 SMD (surface mount device) capacitors were developed to mount directly to the printed circuit board. Their small size and very short leads reduce the chances of spurious RF emissions. This is an important factor to consider when attempting to rebuild a VCR's circuit board. The original SMD capacitors should always be replaced with the same style of capacitor.

The Panasonic AG-1980 VCR uses many SMD capacitors in it's color video processing board. The small aluminum can that surrounds the capacitor keeps it close to the circuit board, thereby reducing RF emissions. For the best results we replace all aluminum SMD capacitors using our hot-air rework station. The finished job looks very similar to the original caps that came off the Panasonic assembly line.

Unfortunately we've seen many dubious repair techniques. Some people take the easier method of using a conventional soldering iron to solder tubular or tantalum electrolytic capacitors above the circuit board. This might get the circuit working, but we feel that Panasonic used SMD capacitors for a specific purpose, the  most important of which is to keep RF interference within the Y/C board as low as possible.

Tubular electrolytic have long leads, these leads can act as antennae, transmitting RF noise around the circuit board. Tantalum capacitors have shorter leads, but they have a disastrous failure mode that can be triggered by voltage spikes only slightly higher than their rated operating voltage.1  To maintain the design integrity of the original Panasonic circuit boards, we always use aluminum SMD caps as replacements.

As we rebuild the Panasonic AG-1980 Y/C circuit boards, we use new SMD capacitors, just like the type that originally came from the factory.  Instead of a soldering iron, which often can't reach hard areas, we use a hot-air rework station. This allows us to direct a stream of hot air specifically at the base of the capacitor to melt the solder. The old capacitor is then removed with tweezers, the connection is cleaned and prepped, and a new SMD cap is soldered to the board, again using hot-air rework technology.2  This gives the best results and maintains the original look and design intentions of the engineers.  It's a tricky, painstaking process, but it returns the AG-1980 to it's original glory!

As we're replacing the SMD capacitors in your VCR we're constantly checking the quality and low ESR value of the replacements. ESR value represents the internal resistance of a capacitor. When the electrolyte in the capacitor goes bad, the ESR value can become very high. This causes problems that are visible in the video image.

To ensure that you get the best quality replacement capacitors, we draw from several suppliers. We then hand check each replacement cap with a special ESR meter before it's installed in your VCR.  We look for the lowest ESR value, which will translate to the best video output and longest lasting repair. Other "out-of-spec" capacitors get thrown out, and never make it into your refurbished VCR.

Important note: Some customers have asked if we sell rebuilt Y-C boards for a D.I.Y. repair. We don't offer this service for several reasons. Unless you're very familiar with the AG-1980, there's the chance of damaging the mainboard and cables when you remove the Y-C board. Also, just replacing the bad capacitors on one board does not give optimal results. Several circuit boards on the AG-1980 interact, so problems in other circuit boards show up as video problems even though the Y-C board has been replaced. At TGrantPhoto, after we replace capacitors, the whole VCR is re-tested and aligned as a complete working unit. This is the only way to return it to factory specifications.

1  Are tantalum capacitors safe for use in new designs?