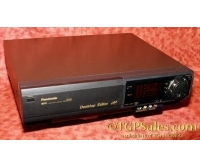 How can I prolong the life of my VCR?

Unplug your VCR when it's not being used.  We have all our equipment on power strips so we can switch it all off at night. If you can get at the power plug easily, unplugging is even better. One of the reasons for unplugging is that you protect the VCR against any power surges coming through the AC line. Another reason is that most VCRs use what's called a Vacuum Fluorescent Display (VFD). These displays operate in similar fashion to the old-style TV picture tubes, there's a filament that glows to activate phosphors. Over time the emissions decrease and the phosphor efficiency is reduced. If your VCR has a VFD display and it constantly stays plugged in, you may notice that it's clock  just doesn't look as bright as it used to.

All that being said, capacitors in your VCR benefit from having some voltage applied to them from time to time. There's electrolyte inside the capacitor. When a capacitor has voltage applied to it, this keeps the electrolyte from changing or "forgetting" it's characteristics. This doesn't require much attention, maybe just turn the VCR on for 15 minutes every few weeks. This is one reason why someone that's stored a VCR for a couple of years is surprised when they plug it in and find it's not working! Rubber belts also develop a "set" from being in one position for too long. So as with everything in life, a little exercise is always good!

The playback picture is really bad. The picture jumps up and down. When I look at my tape it's wrinkled all along the edges!

Stop using your VCR immediately! There's something out of alignment and your VCR is crinkling the tape edge as it plays. Your tape is getting irreparably damaged! This usually indicates that there may be some sort of mechanical or alignment problems, either inside the VCR or your tape may be sticky or moldy. We offer alignment & cleaning on several VCR models, so give us a call.

The Panasonic AG-1970's don't experience the same problems that the AG-1980's have with capacitors going bad. This is because the AG-1970 was made a year or two earlier and was using a different source of capacitors. Unlike the AG-1980, the AG1970s don't have circuit boards loaded with SMD (surface mount device) capacitors. This is not to say that the AG-1970 won't have capacitor problems, there's still many tubular electrolytics and a very few SMDs throughout it's circuitry. At times, these can also become leaky and require replacement.

The AG-1980's have a video board that has about 25 surface mount capacitors (SMDs) they're nearly always bad when we get them in for repair; the picture is either black, messed up with color bars or showing some other color problem related to the bad capacitors. As a preventative measure, all the AG-1980s that we work on have the entire Y-C circuit board rebuilt with new SMD capacitors. It takes us about 2-3 hours of intensive work to replace the bad SMD caps on a Panasonic AG1980. The replacement capacitors have improved chemical composition, and will last a very long time.

The AG-1970 is built somewhat differently inside, it uses completely different circuit boards. The AG1970 is a fine VCR, especially good for SP transfers. However, if you're doing a lot of SLP/EP transfers, the AG1980 is the preferred VCR with its stronger noise reduction and a much more robust Time Base Corrector (TBC)

I'm suddenly seeing what looks like black and white ants fighting! The tape played just fine a minute ago!

This sounds like clogged video heads. Tapes have a mylar base that's coated with very fine magnetic oxide. As a tape plays, some minute amounts of oxide wear off. In the case of a tape that hasn't been played in years, there may be much more loose magnetic oxide. This falls off, and the first place it goes is in-between the very fragile video heads, causing a very snowy picture. There's several ways to clean the heads, but it's a delicate operation and can cause damage if done improperly. See our article here

Why do I see a snowy picture in SP speed, but my EP (SLP) tapes play fine?

My VCR's video head drum has a small bump in it, just below where the video heads spin

This is purposely put there by the manufacturer. The "bump" allows a little bit of air to get underneath the tape so it doesn't stick to the video head drum. Without this "bump", the video head drum would become highly polished, and so smooth, in fact, that the tape would actually stick and drag as it travels around the drum.

Should I demagnetize my VCR's video heads?

No, we advise against demagnetizing the video heads for the following reasons:

Depending on the model of your VCR, you can have two to six video heads. Each video head looks like a tiny metal horseshoe with thin wires wrapped around it. While heads generally resist wear from video tape, they have the disadvantage of being very fragile and brittle. The strong magnetic field produced by the close use of a tape head demagnetizer could conceivably damage video heads.

Additionally, VCRs utilize magnets enclosed inside the spinning video head drum to signal the heads' position during playback. Therefore, it's remotely possible that the powerful degaussing field of a tape head demagnetizer could damage these magnets.

While tape head demagnetizers perform a useful purpose on audio tape recorders, our recommendation is not to use them near video heads.

This usually indicates a problem with the "skew" adjustment. There's too much back tension on the tape as it leaves the video cassette and feeds into the machine. Unfortunately this is a complicated adjustment, requiring realignment of the mechanism. If you have a Panasonic AG-1980 or a JVC SR-V10, give us a call, we can perform the adjustment. Note: This could also be related to mold or stickiness on the tape. Try a tape that's known to be good and see how it plays.

Back in the 1980's, VHS T-120 tapes cost about $15, but there were overseas "knockoff" brands like Certron. You could buy these for $5 or $6 a tape. Guess what? They weren't made as well as the" Big Name" brands and certain shortcuts were taken in manufacture. It's usually these "off brands" that get very noisy during rewind. To make matters worse, off-brand tapes often had worse oxide coatings that the "Big Name" brands.

What's the difference between off-brand videotape and expensive name brands?

Videotape (and also audiotape) was manufactured on large mylar rolls, about 4 ft wide by about 1000 ft long. Onto this mylar base, magnetic oxide was sprayed and adhered with a special binding agent. Towards the end of the process the large roll is slit into the various widths for different uses. The best quality recording tape would come from the middle, where the oxide particles were distributed evenly. The outer parts of the tape had mediocre oxide distribution, this went to the budget tape sellers. Obviously, if you used high-quality, brand name VHS tape, you have a much better chance of retrieving good images from your archived recordings. Cheaper tapes didn't record as well, and after all these years they'll probably shed oxide much more easily.

I hear a ticking or buzzing noise in the audio playback

This is often due to the playback VCR picking up stray signals through it's internal audio circuits. It's more prevalent when playing back tapes in the linear audio mode, with Hi-Fi playback turned off. Some VCRs have linear playback heads that are especially prone to microphonics. You can actually tap the linear audio playback head and hear a "thump" in the sound. If the VCR is used normally this is usually not a problem, but if the VCR is placed near some equipment that's radiating RF energy, interference may result. Sometimes a nearby cable modem can also cause interference.

Some causes of audio interference: police scanners produce a rhythmic "click-click-click" as they scan; old-style tube-type TV's may produce a buzz; aquarium tank heaters can produce a buzz or clicks as they turn on and off. There's many possibilities and the best solution is to systematically unplug nearby devices one by one until the problem disappears.

No picture in PLAY mode, or the VCR plays tapes at the wrong speed

This usually indicates a problem in the capstan servo circuits. The VCR can't determine the correct playback speed. Sometimes you'll see a picture in the FF scan mode, but it will disappear in the PLAY mode. This is a problem with the servo circuits and requires professional servicing.

What are Drum Hours?

Some professional VCRs have a menu that shows "Drum Hours"  This is usually accessed through the set-up menu, and is a record of how long the video heads have been spinning. However it's more a record of the time the VCR has been in service, rather than a direct measurement of head wear. Service manuals often use the "hours in use" (or drum hours)  as a rough suggestion as to when the video heads should be replaced.

How do I measure video head wear?

The condition of the video heads can be determined by using several methods;

~ playing back a special test tape and observing the results on a waveform monitor. When a video head is badly worn, it's first noticeable as a falloff in high frequency picture details when playing back a multi-burst test tape (a tape containing various pre-recorded video frequencies)

~ inspecting each video head under a microscope. A damaged video head with a slight axial twist can often affect alignment and tape playback interchangeability.

~ bad Hi-Fi sound playback that can't be corrected through alignment is often an indication of poor video heads.

Note: The above content  is copyright TGPSales & TGrant Photo. Copying or use on another website is prohibited